With Nokia World 2011 getting closer and closer, more details about the much anticipated Nokia Windows Phones are starting to surface. Pocketnow.com today revealed the first images of a print advertisement for the new Nokia 800. Check them out below: 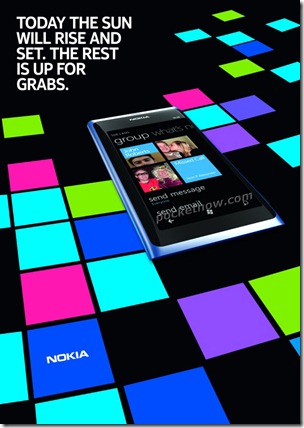 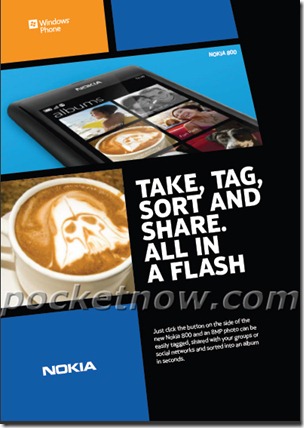 According to the device shown, as well as the specs revealed in the ad (8MP camera), this pretty much confirms that the Nokia 800 will be the “Sea Ray” that was shown in previous leaked videos. If the recent leaked specs can be trusted, the device will feature a 3.7” AMOLED Clear Black Display screen, 1.4 GHz processor, 16 GB of storage, as well as the 8MP Carl-Zeiss camera (this is also confirmed in the video).

Interesting enough, we recently saw a device named Nokia “Lumia 800” on Occasional Gamer’s statistics page, which could indicate that the device may be branded as “Lumia” in certain markets. Separately, an Orange France internal memo also revealed a device named Nokia “Sun”, also with a 8MP camera and 3.7” screen, is coming. Both name actually goes well with the tagline in the advertisement “today the sun will rise and set”, so it remains to be seen whether these are referring to the same device or not.

Besides Nokia 800 (“Sea Ray”), other devices which are expected to be revealed at Nokia World include the Nokia 703 (“Sabre”), as well as the Nokia Ace.