Today I visited some of the Microsoft Hotmail team in London to be shown the new features that are coming soon to the webmail service. The briefing started with Microsoft talking about where Hotmail has come from and where it is now and how they need for some of the new features. Some of this information isn’t new but I thought I would share it with you anyway.

In 2006 Hotmail offered only 2MB of storage and would only allow attachments of less than 1MB. The performance of the service wasn’t ideal requiring page refreshes after clicking anything and there wasn’t really a mobile experience with POP3 access requiring users pay for Hotmail plus. 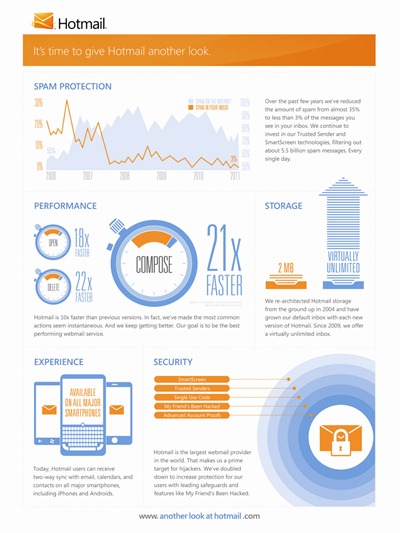 However, today in 2011 things are quite different; Hotmail now provides users with virtually unlimited storage for their emails and allows users to upload multiple attachments each up to 100MB. The site is now also 10 times faster than it was in 2006, this has been achieved through several different practices that I will talk about later. Hotmail is now very accessible on a wide range of mobile devices through any browser and also through native apps on all of the most popular mobile platforms.

But perhaps Hotmail’s biggest achievement is the amount of spam it has stopped from getting into users inboxes. Hotmail has been using Microsoft’s SmartScreen filtering service since 2007 to stop spam messages getting into the webmail service. SmartScreen is used throughout many Microsoft products including enterprise and government products to protect users and currently blocks 5.5 billion spam messages a day. SmartScreen is also being built into Windows 8 and is already found in Windows Live Messenger.

Microsoft then spoke more about how they have achieved some of the speed improvements within Hotmail. In 2007 Hotmail had a total storage space of 20 petabytes and Microsoft knew that they needed to increase that storage exponentially and so today Hotmail now has over 140 petabytes of storage. This exponential growth continues and Microsoft is now adding 1 petabyte of storage to Hotmail a week. That’s a 1000 1000 gigabytes a week.

The amount of storage might seem excessive but its needed for all the millions of users of Hotmail. Microsoft is working hard to optimise the way that data is stored within their server farms to ensure the quickest Hotmail experience possible. This is done through a combination of very fast but relatively small SSD storage and slower but larger HDD storage. Things like older emails and documents are stored on the HDDs so that a user can still access them but aren’t likely to access them all time whereas the SSDs are used to store the metadata of Hotmail and more often accessed data. This metadata makes up 3% of the total of Hotmail storage space and is used for various things such as marking emails as read, which categories emails are filed under, etc. The metadata needs to processed as quickly as possible to provide and quick and seamless experience, exactly what SSDs are great for.

The result of this storage optimisation is an extremely fast Hotmail experience with it feeling more like a native app than a website. But there is also some client side techniques employed to ensure the best possible experience within Hotmail. When a user is in their inbox the first 100 or so emails are cached to their browser to make opening emails almost instant and is very good when using a mobile device when the internet connection is likely to be lost. It is possible to reply to these cached emails and the sent emails are then cached in a virtual “sent” folder to allow people to still work through their emails even if the internet disappears.

However, there is more to the new updates in Hotmail than just speed optimisations, there is a new feature called categories. This is Microsoft’s response to dealing with Greymail, emails that people get that they think is spam but are often things they have signed up for. 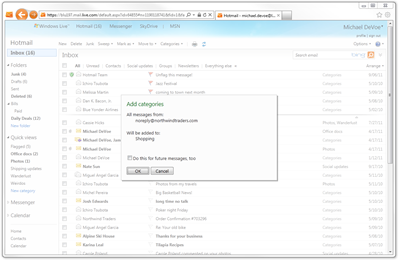 Categories allows users to file emails with a specific category, or multiple categories, if they wish to keep their inbox in order. The categorisation of emails is done automatically for some types of emails such as newsletters and social updates as Hotmail is able to detect the type of location the email is being sent from. It is possible for users to identify non-categorised emails in their inbox and then file one or all of the same type of email under a category without leaving their inbox. Then on the sidebar under “Quick views” are all the categories with emails filed under them. Users can also set up rules for when and how emails are categorised, it can be one email, all emails within the inbox or even all future emails too. 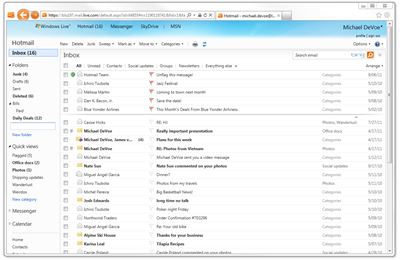 The “Sweep” feature of Hotmail is also due to be expanded allowing “scheduled cleanups” of folders, categories or types of emails. The example for this was Groupon Daily Deal emails which could be filed in their own category and then removed after 1 day.

The improvements to Hotmail are impressive and far reaching with better performance and some very useful tweaks and new features. I wouldn’t have thought there was too much to get excited about with webmail but I can assure I am actually quite excited about getting the updates. The updates for Hotmail should be arriving over the next few weeks and if you start seeing any new features in Hotmail then please let us know. In fact some people are already letting us know that they have the new features.

I plan to write a few more posts about today’s briefing, a brief one about Microsoft’s view on updating and adding features to Hotmail and at least one other with the questions and answers session I had with the Hotmail team. I will add links once I have published them.