On Halloween, Tom Rizzo, a SharePoint Senior Director, poked some fun and threw some stones at rival Google, commenting on Google’s plan to retire Google Wave, and more.  He went so far as to create a Halloween graphic, featuring what he called “poorly planned products and a long list of failures”

Of course we got quite the chuckle out of the post, as we can’t think of a better example of “the pot calling the kettle black”. In fact, we were prompted to modify the graveyard (even though our Halloween candy is long gone, some 2 days later): 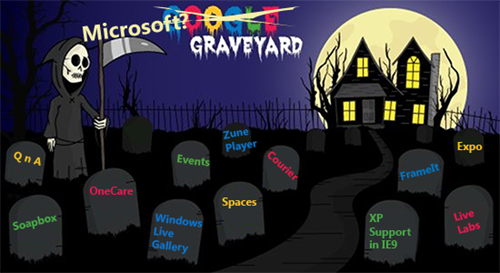 Rizzo proceeded, somewhat amazingly, to fault Google for their cancellations, noting that as a marketer, “(i)f we had adopted these Google tools, we would have lost our dialogues with millions of customers all over the world”.  Yeah, we know what that feels like.

We’ve seen so many Microsoft services come and go that we’ve come to tagging them “Deadpool”, and our incomplete list includes, of course, some strikingly similar products to those on the Google list, including Live Labs (Wikipedia has a more complete, and quite long, list).  Yet Rizzo can’t resist a pot shot at Google’s version, Google labs (which lasted longer than Live Labs did, by the way):

The recent killing of Google Labs is ironic to me. Google releases experimental products and tracks adoption to determine whether to continue providing them. Its products are like spaghetti, Google throws them up against the wall to see if they stick.

As users of Events, and OneCare, and Spaces, and (particularly painful) Soapbox, we know all too well the pain of a “haphazard and noncommittal” product management, with deliveries that “often fall short of expectations”.  Heck, we’ve been Windows Live users since 2005!

All we can say is, at least Google ships (we’re looking at you, Windows Live Essentials!).