First up is a new “Open from the Web” option, which allows you to open OneNote documents stored in SkyDrive from OneNote 2010, without having to navigate to SkyDrive itself: 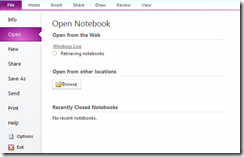 The update also improves the “View Sync Status” dialog, making tracking down sync errors across shared notebooks a bit easier, with a unified appearance for error messages (the “Errors” tab in the dialog is now gone, and the errors appear in the main page, along with links to more info).

You can get the update (along with some other general fixes, and stability and performance improvements for Outlook 2010 and Office 2010), by going to Windows Update on your computer, and selecting the new important updates.  And remember that you can use OneNote on SkyDrive on your desktop, from the web, from your Windows Phone, and even from your iPhone!