I am very pleased that there already 46 responses to the Questions and Requests: SkyDrive post and I expect that we can easily get over 50 different questions and requests for Microsoft. 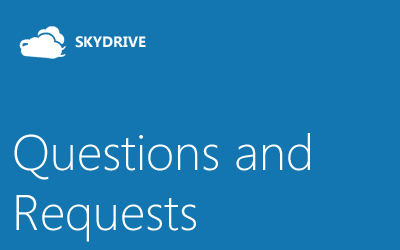 As many of you will know, yesterday Microsoft announced and released a significant update to SkyDrive which might actually have already answered some of your questions or indeed implemented some of your requests. Both of which are great outcomes but you might now have new questions about the service or want to see something else added to SkyDrive. It would be great that if readers of Liveside who have any questions or requests about the new improvements in SkyDrive could leave feedback. It can’t be that often that Microsoft gets to receive valuable and constructive feedback so quickly about a new update.

Please do leave a comment or send me a tweet with any questions or requests you have about SkyDrive so I can pass them on to Microsoft.