Rumor: Microsoft to bring “beaming” file transfers across Windows, Windows Phone and Xbox in the future?

We picked up a wild rumor today which seemed quite possible with the technologies Microsoft has today – the ability to easily transfer files directly across your phone, PC/tablet, and the TV using near-field technologies. Here’s the tweet from @MS_Nerd:

The tweet claims that Microsoft will utilise technologies such as Bluetooth, NFC, and Wi-Fi Direct pairing to enable direct file transfers between devices across the “three screens” – namely the PC/tablet (via Windows), the phone (via Windows Phone), and the TV (via Xbox). 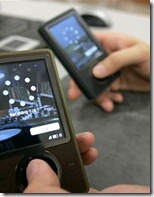 Fast forward to 2012, when Microsoft is due to release the next generation of its operating systems – Windows 8 and Windows Phone 8 “Apollo” (and not to mention a possible new Xbox). Microsoft is attempting to “unify” the experience across the three screens, starting with its “Metro” user interface. But that is not all. The next step for Microsoft is to bring apps working across the three screens (for example, with WinRT, developers can port their apps across Windows 8, Windows Phone, and the web with minimal effort), and allowing these apps to interact with each other. But what about getting our most important data, like photos, music, videos, or even documents, to be accessible across the three screens? Well first of all there’s SkyDrive, which uses the cloud to let you sync files across devices, with a rumored SkyDrive client app for various platforms coming soon. But if my devices are right next to each other, why should the files take the long route?

This is where the “beaming” technology comes in, which makes file transfer between devices truly effortless and seamless. Microsoft had long envisioned this technology, particularly in its Productivity Future Vision videos. We spotted another video, also created by Microsoft, which demonstrates how this “beaming” technology could potentially be used to transfer data between Windows Phones, the TV, and tablets. Check it out below:

So what do you think? Do you think we could see this technology coming to the next gen platforms like Windows Phone 8? Let us know in the comments below.