Now with the simplicity of voice and gesture technology on Kinect for Xbox 360 and the intelligence of Bing search, people can browse and watch some of their favorite MSN Video content, including awarding-winning news from MSNBC, leading sports programming from FOX Sports on MSN, viral videos from StupidVideos, and more. 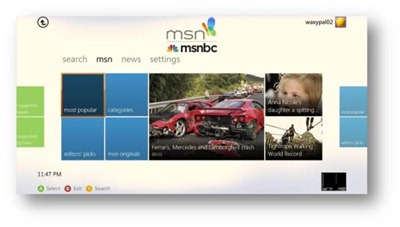 Additional content is set to become available for the MSN Video app in the coming months.  The MSN blog has more details.

YouTube also has an Xbox dashboard app in the works, which was slated for a “late December” release, according to the Microsoft press release announcing the new dashboard.  Well, if you were in the Xbox dashboard beta, you already have access to the new YouTube app.  Here’s a video showing off the new app (pardon the NSFW exclamations from “Cookie IMonster” at the beginning, he thinks the app is, well, amazing):

According to MajorNelson.com, a whole slew of new apps are now available, including YouTube and MSN Video.  Here’s the list: