Is Windows Phone moving to the Windows org? 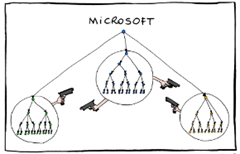 Today, in a blog post she called “As the Microsoft Windows Phone org churns”, while noting the transfer of Windows Phone GM Matt Bencke to Xbox Live, Mary Jo Foley coined a new phrase, only half jokingly aligning herself, a la the Occupy Wall Street movement, as one of the “1.5%”:

As I’ve blogged and said repeatedly this year, I am a Windows Phone fan. (Yep, I’m one of the 1.5 percent.) I really hope Microsoft doesn’t relegate WP to nothing but a complement to Windows, in terms of its positioning and marketing. But if Microsoft and partners can’t grow Windows Phone share in a very substantial way in the next few months, maybe this is Plan B… (?)

The departure of Bencke follows the recent “benching” of Windows Phone President Andy Lees in favor of Terry Meyerson, a move some are positioning as a precursor to an org move that would bring Windows Phone (presumably powered by a “MinWin” Windows 8 core), into the Windows org, run by President Steven Sinofsky.

So will Windows Phone become a Sinofsky phone?  We’re not so sure.  For one thing, Mary Jo points out that she’s hearing the marketing efforts for Windows Phone and Windows may indeed merge, but not the (development) orgs themselves.

While we do believe that Windows Phone will run a “MinWin” core (and sooner rather than later, as Nokia will be insistent on a next gen set of capabilities to sell next holiday season), and we even think that the same treatment may come soon, too, to Xbox, building on the emphasis of the Xbox/Kinect/Bing triumvirate as Microsoft’s version of a smart TV controller.  We strongly doubt, however, that Xbox would become part of the Windows org.  That would be 1/3 of the “3 screens” strategy outside of the Windows org already, and there’s not much reason to believe that moving fast paced consumer facing smartphone development into the sometimes (ok, always) slow and plodding Windows org would make much sense.

What Windows would control would be the “MinWin” core that Windows 8, Windows 8 Server, Windows 8 tablets, and in this scenario Windows Phone and Xbox, would all “share”.  All roads would still lead to Sinofsky, with a central Windows developer team powering essentially everything Microsoft makes.

And while there are basic differences between each of the 3 screens that go beyond just the screen size, there could be lots of common ground in terms of apps management and parts of the OS outside the core that would be re-usable between devices, again controlled centrally, most probably by the Windows org.

Just about everything we’ve heard or read in the past year or so has been pointing to this single central OS core running all 3 screens (phone, PC, and TV), but the power of the concept could be in differentiating and expanding each of those screen’s capabilities somewhat separately while still centrally maintaining a safe, solid, and up to date core.