Nokia announces 900 for AT&T, available “in the coming months”

At a press event at CES in Las Vegas today, Nokia CEO Stephen Elop took the stage to announce the Nokia 900, the widely anticipated first “re-entry” for Nokia into the US smartphone market.  The new phone, available “in the coming months” exclusively on AT&T, features some impressive camera specs, and some partner announcements. 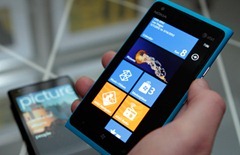 The new phone, available in black and cyan, will feature quite a list of specs, some of which we’ve been able to glean here from the various liveblogs of the event (note to Nokia: want the best coverage for your announcements?  live webcast them, doh):

In lieu of a webcast, Nokia Conversations has posted a short video showing off the 900:

So now it’s official.  Most, if not all, of the information presented today was fairly well known already, except for the details of the exclusive AT&T deal, and Elop was careful to say in a question and answer session that there were no “additional announcements for today” on other carriers such as Verizon, and there was no talk of price or timing of availability other than “in the coming months”.

Update: here’s the official Nokia press release on the 900.