News is out today that Microsoft is apparently planning a restructuring of its marketing operations, according to an article in Bloomberg News.  While the move may cut “hundreds” of jobs, it is apparently aimed primarily at restructuring the “CMG”, or Central Marketing Group, to better respond to increasing competition in corporate computing from Amazon, Google, and Apple.  Mary Jo Foley reports hearing that as many as 40% of CMG may be cut (a number she finds “crazily high”), but also hears that some of those cut from CMG may be absorbed into the Windows Phone and Server and Tools orgs, as they restructure with new leadership.

Microsoft spends billions on marketing yearly, and Bloomberg reports that Steve Ballmer “doesn’t think the company is getting enough return on the billions it spends annually on marketing”, according to the sources.  The company last year promoted Chris Capossela to Chief Marketing Officer, and he’s been conducting a review of marketing operations, working with senior marketing executives like Tami Reller, who just demoed Windows 8 during the CES keynote, and Yusuf Mehdi from Xbox.  The restructuring may be set to take place within the next 30 days, according to Bloomberg.

We’re certainly encouraged by the strong marketing push being brought to Windows Phone this year, both by Nokia, and apparently by TMobile, too, as they roll out a Windows Simple campaign for the Nokia 710, as noted by WPCentral: 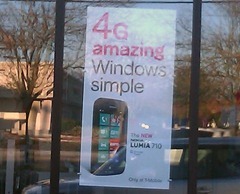 Windows Phone marketing by Microsoft has been less than effective, so far, and any efforts by Microsoft to revamp its total marketing strategy seems like a good idea to us.