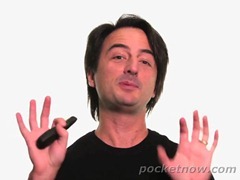 Pocketnow.com has revealed a number of new details about Windows Phone 8, code named Apollo, after apparently getting their hands on a video featuring Microsoft Senior Vice President Joe Belfiore, and intended for partners at Nokia.

While Pocketnow doesn’t post the video (which would be sure to be taken down quickly if they tried) they do reveal quite a list of features and improvements coming to Windows Phone 8.  Here’s a quick recap:

In addition, the video purportedly confirms a common core between Windows 8 and Windows Phone 8:

Windows Phone 8 won’t just share a UI with the next-generation desktop and tablet OS, apparently: it will use many of the same components as Windows 8, allowing developers to “reuse — by far — most of their code” when porting an app from desktop to phone, according to Belfiore. He specifically mentions the kernel, networking stacks, security, and multimedia support as areas of heavy overlap.