Windows 8 has a special Bing homepage, Consumer Preview name all but confirmed

Today a special Bing page was spotted (My Digital Life via Twitter) that is designed for users of the Windows 8 Consumer Preview. The homepage features a HTML video of a betta fish swimming across the screen, the fish is now synonymous with Microsoft beta/preview version of Windows as it was the main feature of the default wallpaper in the Windows 7 beta. 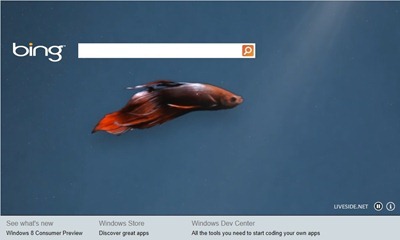 There are 4 hotspots on the video on the special homepage, sadly most of the links in the hotspots don’t yet work. The hotspots are:

At the bottom of the page are three sections; these are:

As you will notice the name “Windows 8 Consumer Preview” is mentioned twice on this page and is the most obvious, public and official use of the name so far. The name “Consumer Preview” has been rumoured about for the past month since it was first mentioned at CES and looks set to replace the term “beta” Microsoft have traditionally used.