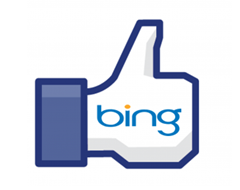 Much has been made recently both about Google’s somewhat forced entry into social search as it tries to compete with Facebook, and with Bing’s much friendlier relationship with not only Facebook, but Twitter.  Last week, Liz Gannes over at the Wall Street Journal’s tech blog All Things D got ahold of Bing Director Stephan Weitz to quiz him on Bing’s reaction to Google’s new social search ventures.

Gannes quizzed Weitz on the status and the impacts of social search on Bing, and why Bing hasn’t capitalized more on Google’s issues (All Things D does note that there are some new Bing ads coming, so we’ll see if the gloves come off).  Weitz summed up Google’s approach:

But they are learning just like we are. They did what we didn’t want to do, which was make the user experience peppered with this stuff, with +1s everywhere, the Google+ content in the top corner. I think [Google] realized we were ahead and they overextended. But I know a ton of guys there and they’re smart and they’re reacting to what has been said.

But it’s in the last question that Weitz reveals what may be coming soon for Bing:

When are you going to press your social advantage in Bing, seeing as you have both Facebook and Twitter deals and Google doesn’t?

You’re going to see the culmination of a lot of our learnings in the not too distant future. All those lessons will be applied into something that I think is pretty interesting. How we think about social is always evolving, and the next turn of the crank is more differentiated than we’ve seen in the past.

Of course, for those of us who have grown tired of the always-in-beta on again off again approach by Bing to improvements such as HTML5 transitions in the results pages (we’ve had them come, and go, again recently, and we get regular sightings from readers, but as far as we know, HTML5 Bing STILL hasn’t fully shipped), we’ll believe it when we see it, but are you ready for “the next turn of the crank” with Bing and social search?