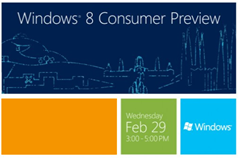 Microsoft has sent out invitations today to a special leap year day Consumer Preview Launch in Barcelona at Mobile World Congress, and since we’ve been promised a “late February” availability for the not-a-beta, we’re assuming we’ll be able to download the bits on February 29, 2012.

Developers and others were able to preview Windows 8 in a bare bones Developer Preview available at Build last November, and it sounds like some of the more anticipated features of Windows 8 (including a new version of Windows Media Center) still won’t be supplied with this Consumer Preview.

We should get our first look at the pre-bundled Metro style apps that appear to be a replacement for Windows Live Essentials, however.  Tom Warren at the Verge listed a number of apps (with possibly more to come with the CP) thought to be bundled with the Consumer Preview:

Tom also details some more information about the apps, and adds further fuel to the “Zune is dead” fire:

These applications, and possibly more, will come preinstalled for the Consumer Preview release, and will be updatable from the Windows Store. Mail, Calendar, People, and Messaging are designed to be core Windows communications apps and are not branded with Windows Live. One source has revealed that Microsoft is working to enable SMS support for the Messaging app which operates as a Windows Live Messenger equivalent in its current form. The Music and Video applications are currently branded with Zune, but are built by the Xbox team. We are hearing that this branding will be removed shortly before the Windows 8 release, moving to Xbox Live for Windows as the entertainment brand for Windows 8 Music, Video and Games.

Of course for Windows Live fans, there are still lots of unanswered questions.  What happens to Live Mesh and Writer?  What about continued Windows Live Essentials development for Windows 7?  How will Windows Live Messenger and Skype evolve?  At least, barring the usual snafus, we won’t have to wait much longer to find out.