Is this the end of “Windows Live” as we know it?

The future of Microsoft’s consumer online services, especially around SkyDrive, are arguably brighter than they’ve ever been.  This week’s announcements that SkyDrive will finally provide a full client experience, with sync capabilities, folder upload, larger file sizes, and more, while perhaps long overdue, are welcome.  That Windows Live Mesh will be folded into SkyDrive, providing remote access and file syncing is awesome news, as we’ve feared for the future of Ray Ozzie’s baby for quite some time now.

Hotmail, too, while it is going to continue to have perception problems, has made great strides over the past couple of years, and is emerging as a powerful new tool built for today’s email: a junk mail catcher and a “gray mail” manager, with threaded conversations and a clean new look to bring web based email into the next generation.

But, as we’ve noted here before, it’s Microsoft SkyDrive and Microsoft Hotmail now.  What we’ve known as Windows Live Essentials have been separated out from the web services, and new versions of Mail and Calendar and Photos, etc., are just about to be unveiled as part of the Windows 8 Consumer Preview.  There won’t be much/any need for Essentials on Windows 8, as the company (and, they hope, the world) moves to Windows 8 and Metro style apps.

We’re seeing other indications that the “Windows Live” brand may be on its way out, too.  Just recently a reader noticed that the icon for sharing content on video music site Vevo had changed from “Windows Live” to “Hotmail”:

…even though that box brings up the Messenger connect dialog: 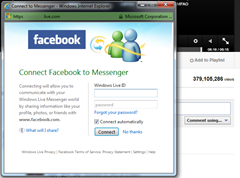 Maybe just a coincidence, or maybe further indications that a full on move away from “Windows Live” is occurring.

For most of us, anymore, Windows Live means Essentials.  The term “Windows Live Hotmail” always seemed long and redundant, and we’re willing to live with “Microsoft SkyDrive”, too.  They’re web services, and since they connect up to everything from an iPad to a Blackberry, it makes sense to drop the Windows Live branding.  And with Windows Live Mesh being assimilated into SkyDrive, that leaves one less Essentials service to worry about.

Messenger is a story unto itself.  In many parts of the world, “to MSN” had become a verb, and it was questionable whether rebranding Messenger as Windows Live made sense to begin with.  Now, with Skype looming, that powerful brand well may (and probably should) come to the forefront, with Messenger either being rebranded as a Skype product, or just folded into the Skype client.

Windows 8 is going to bring “fast and fluid” Metro styled apps that perform most if not all of the functions we get from Essentials today, and a clean new Photos app and a new mail interface are going to help to make Windows 8 shine.  Notably, at Build and in subsequent discussions about Windows 8, the words “Windows Live” are barely mentioned.

But there’s a big problem, of course.  If history is any indication, XP, Vista, and Windows 7 are going to be the dominant operating systems for years to come.  This week we found out that Microsoft is extending the support of Vista and Windows 7 for a full ten years, and if they go the way of XP, they’ll be in full use for a long time to come.

What we really need is a way to run Metro style apps on Windows 7, so that app fragmentation doesn’t occur, but that doesn’t look like it’s going to happen, even if it were possible.

So what does that mean for Windows Live?  What happens to Essentials?  Will we be using legacy versions of Writer and Movie Maker in 2015 or 2020, while Microsoft innovates on a Metro style platform?  Microsoft just spent the last 5 years cleaning up redundancies between Outlook and Outlook Express and Windows Mail in Vista and Windows Live Mail; they’ve solidified the orgs so that these siloed applications have come together.  But now what happens?  Will we have one Microsoft developing for Metro style and Windows 8, and another to service XP, Vista, and 7?  Microsoft’s hope, of course, is to get everyone on Windows 8.  Is that going to happen?

We sure wish we knew.