The big news (and impressive showing) from Nokia at MWC 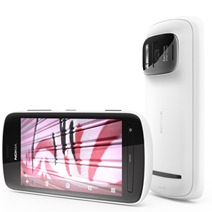 Nokia just concluded its press conference in Barcelona at MWC with the unveiling of 5 new phones (only one of them a Windows Phone), new software experiences, and a pretty amazing new imaging technology called “PureView”.  Also announced were (finally!!) a Skype for Windows Phone beta client, some news about the coming melding of Nokia and Bing maps, new (lower) hardware specs for Windows Phones, and with it (while not announced in the press conference) a new Windows Phone SDK version 7.1.1, with an updated 512mb emulator and a new 256mb emulator.

To explain it all in a bit more depth than the press conference and web cast could, Nokia issued 4 separate press releases, and the Windows Phone blog offered up its first post by new President Terry Meyerson (who we have to admit looked a bit stiff and nervous onstage at the Nokia event), detailing the Windows Phone side of the news.  Here’s a set of links to all the official announcements:

What immediately struck us during the press conference, however, is that whether it was Stephen Elop, the switch to Windows Phones, the competition from Apple and Google, or just a general back-to-the-wall will to fight back, Nokia seems to have awoken from its slumber from the past few years.

They are attacking the emerging markets with a focus on low cost phones and a bold new move into China and emerging markets, separating themselves from other OEMs with a set of unique and actually useful tools and software, moving hard into location based services, and looking to blow the competition away with some amazing audio and video technology that could be unparalleled not only in phones but in consumer audio/video in general.  Pretty impressive stuff, and all from one press conference.

In fact, there was so much new stuff and so much nuance that it’s hard to fit all into one blog post.  So instead let’s take a look at a couple of things that got us to sit up and take notice.

The first thing, as Elop called it, is that Nokia has “increased its clock speed”, and will continue to do so.  Morale had been pretty low at Nokia these past couple of years, as a company that had grown fat and happy from a solid position in the marketplace got blown out of the water with the iPhone, found itself floundering in the marketplace, and then shocked by the announcements that their new CEO was dumping pretty much everything they knew in favor of something called Windows Phone.  Elop has this company innovating again, and back on the move.  If they can sell some phones (which is still a big if, as Apple and Google aren’t going to just roll over and go away), Nokia may still have a few tricks up its sleeve.

Nokia looks to be intent on innovating in software and services at least as much as hardware, too.  They announced new services like Nokia Life for Asha phones (an SMS service bringing info and education to users in emerging markets), Nokia Reader, a new Windows Phone newsreader app featuring live tiles and a magazine like format, and our first look at a closer collaboration between Nokia Maps and Bing Maps, which from what we could tell is going to bring the Bing Maps look to Nokia Maps (and hopefully bringing some Nokia Maps technology to Bing Maps, too).  Nokia Drive is being updated with support for offline use, and the new Nokia Transport is bringing public transit info to 500 cities in 46 countries.

But the big takeaway from the press conference, even though it was announced for a Symbian phone, is the PureView camera technology and the Dolby sound enhancements.  Elop hinted that the technology would be expanding beyond the Symbian 808 (which we’re taking to mean “coming to Windows Phone”) and the press release does too (emphasis ours):