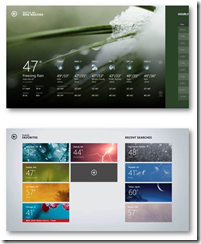 The apps are available with the Windows 8 consumer preview.