A sneak peek at Office 15, (and some questions about Windows Live Writer)

This morning Paul Thurrott posted an extensive Office 15 “Preview”, after he was able to “get his hands on a copy” of the Office 15 Technical Preview, which was released a few weeks ago to a select group of Microsoft customers under NDA.

Thurrott posts a number of screenshots of the upcoming version of Office, slated to be released sometime later this year along with the release of Windows 8.  A public beta is expected sometime this summer.  He also pointed out a number of new features in the technical preview, including a new Get Started area: 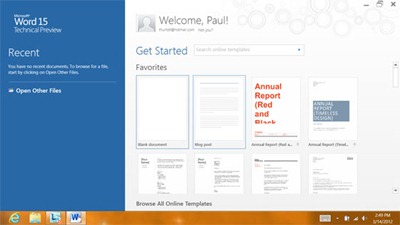 … a minimized by default Ribbon, a new “Design” tab for configuring document themes, and some revisions designed to make Office work better with touch interfaces, including a full screen mode, and “touch mode”, which “increases the size of onscreen elements so that they are more easily accessed via touch”: 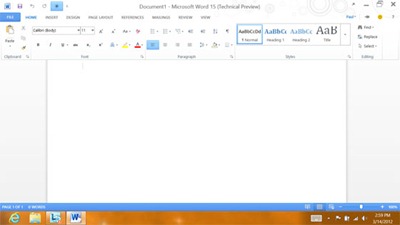 SkyDrive has taken a front row seat in the new Office, and Thurrott was “very interested to see that SkyDrive is the first choice” of save options once you are logged in to your Microsoft account, which happens automatically, and managed from a pop-up window allowing you to configure your connected services.

There’s quite a bit more to see in Thurrott’s Preview, make sure to check it out.

But of course with the fate and future of Windows Live Essentials still in the balance, and no word on what may happen to the Essentials apps, lots of questions are being asked about what Office 15 may or may not replace.  Microsoft watcher and part time LiveSide contributor Michael Gillett pondered about Windows Live Writer this morning on Twitter, in response to Thurrott’s post:

to which Ed Bott responded with a somewhat ominous, although personal, opinion:

Paul Thurrott himself isn’t so sure, saying on Twitter that he thinks there will be a Windows Live Essentials for Windows 8, that there is “far too much functionality missing in Metro apps”, and that he doesn’t “see that happening, personally” (the disappearance of Writer).