Earlier today, WPCentral reported on what they thought was a Facebook direct message exchange between one Aamer Khan and Windows Phone VP Joe Belfiore, noting that “problems” with the 900 was delaying the launch until sometime in April.  We were skeptical that Belfiore would make such an admission, and asked around a bit, and as it turns out there’s more than one Joe Belfiore on Facebook:

WPCentral retracted the story, Belfiore noted that “the launch date is Nok + AT&T’s news to announce. Not us MS folks. Sorry”, and that little bit of Twitter and Facebook drama wound down for the evening.

In the meantime, however, one bit of Nokia 900 news did pop up: Canadian mobile operator Rogers is now accepting pre-orders for the 900, tied in to a promotion for the new Batman movie, The Dark Knight Rises: 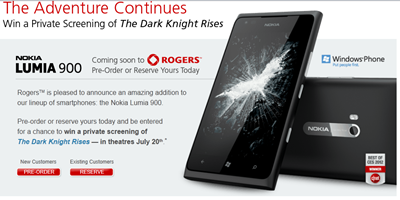 The Canadian mobile website Mobilesyrup.com speculates that since the Dark Knight contest ends on April 10th, that could be the launch date, and notes that the approximate value of the 900 giveaway is $700 Canadian dollars, which could be the no-contract price (the pre order is for $99.99 Canadian dollars on a 3 year contract) (via @vasudevg)