Xfinity on Xbox: not without problems

We just tried to log in to Xfinity on Xbox, and like a number of other users, we’re having some problems, which seem to be related to an inability to authenticate to the service with our Comcast Xfinity username/password combination: 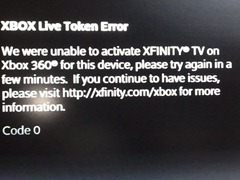 We’re expecting that the problem is just with an overload of users trying to log in to the service all at once, as others are reporting the same issue (with different Error codes, however).

Another problem, one that won’t be fixed anytime soon, is that it’s become apparent that if you use Comcast Xfinity or Time Warner Cable, you won’t be able to use HBO Go on your Xbox.  The Verge reported on the issue earlier today, explaining:

Comcast / Xfinity subscribers aren’t able to get HBO Go working on the Xbox 360, and a quick look at Microsoft’s official site confirms that Comcast as well as TWC are not among the providers offering HBO Go access. We’ve tried getting a Comcast account working with HBO Go and can confirm it isn’t an option.

However, it’s worth noting that HBO content is available through Comcast’s Xfinity TV iPad and iPhone apps, so it’s possible that the forthcoming Xfinity On Demand for Xbox 360 will include HBO as well. That app isn’t available yet, so we can’t say for sure, but there’s a possibility Comcast customers will be able to get HBO programming through Xfinity On Demand.

Since we’re not able to sign in to the Xfinity app, we can’t tell if HBO Go is available (although we don’t pay for HBO here, so that point is probably moot).

Another problem looming quite a bit larger relates to how Comcast is providing the Xfinity app service, through a private network which does not count against your Comcast data cap.  That service seems to be in contradiction to the tenets of Net Neutrality, although the details of the subject are murky, at best.  ReadWriteWeb takes a good stab at explaining the issue, one that’s not easy to describe without getting overly complicated.

We’ll keep hammering the authentication servers until we get in, which is what everyone else is probably doing and why it doesn’t work in the first place, but hey, it’s what we do.

In the meantime, have you been able to log on to Xfinity on Xbox?, or the companion apps from HBO Go or MLB.com?  Let us know how you’re faring.