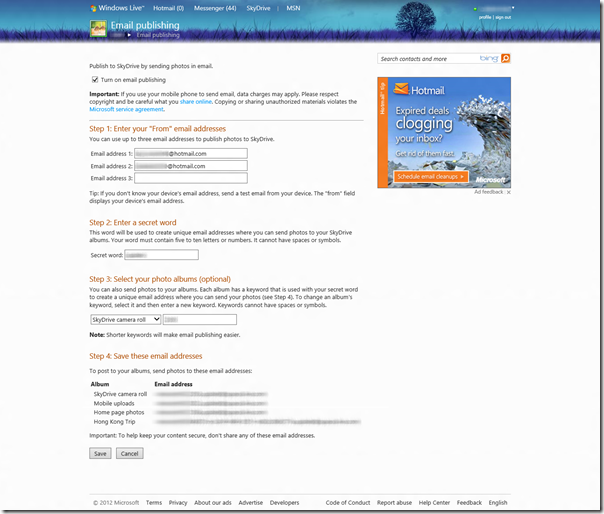 The way the feature worked was that you can setup up to three email addresses for sending the photos from (so that other people can’t just randomly post photos on your Spaces, or SkyDrive), and along with a secret keyword, each album on SkyDrive would then be given an email address (username.albumname.keyword@spaces.live.com) which you can send photos to.

However, the SkyDrive team recently sent out an email announcing that this “email publishing” feature will soon be discontinued. Below is the email:

According to our records, you have opted in to our email publishing feature, which enables you to publish photos to your SkyDrive via email. Unfortunately, we are retiring this feature in our next release, and it will no longer be available for use after April 2012. We apologise for any inconvenience this may cause.

Please visit our homepage to find alternative ways of uploading photos, and look forward to new and exciting features that are coming in future releases. You may also post any questions to us at www.windowslivehelp.com for additional support.

Yours Sincerely,
The SkyDrive Team

Interestingly, the email mentioned the feature will no longer be available for use after April, which is said to be along with the “next release” of SkyDrive. Should we be expecting an update to SkyDrive by the end of April / early May? And will we see all the new features previously leaked – like paid storage, SkyDrive clients for Windows, file size limit increase, and more? We certainly hope so, given rumors are floating around that Google is about to launch their own Google Drive service around the third week of April.