Microsoft will release a Windows 8 Release Preview in the first week of June. Steven Sinofsky announced this during a Windows developer event in Japan. The news was spread via Twitter. 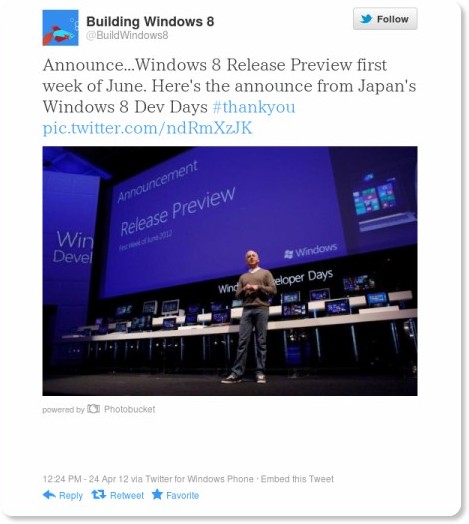 A date for the final release was not given, however expectations are that it will be released this fall.

Microsoft announced earlier that there will be three editions: Windows 8, Windows 8 Pro and Windows RT, with the latest also known as Windows on ARM or WOA.

For PCs and tablets powered by x86 processors (both 32 and 64 bit), we will have two editions: Windows 8 and Windows 8 Pro. For many consumers, Windows 8 will be the right choice. It will include all the features above plus an updated Windows Explorer, Task Manager, better multi-monitor support and the ability to switch languages on the fly (more details on this feature can be found in this blog post),which was previously only available in Enterprise/Ultimate editions of Windows. For China and a small set of select emerging markets, we will offer a local language-only edition of Windows 8.

Windows 8 Pro is designed to help tech enthusiasts and business/technical professionals obtain a broader set of Windows 8 technologies. It includes all the features in Windows 8 plus features for encryption, virtualization, PC management and domain connectivity. Windows Media Center will be available as an economical “media pack” add-on to Windows 8 Pro. If you are an enthusiast or you want to use your PC in a business environment, you will want Windows 8 Pro.

Windows RT is the newest member of the Windows family – also known as Windows on ARM or WOA, as we’ve referred to it previously. This single edition will only be available pre-installed on PCs and tablets powered by ARM processors and will help enable new thin and lightweight form factors with impressive battery life. Windows RT will include touch-optimized desktop versions of the new Microsoft Word, Excel, PowerPoint, and OneNote. For new apps, the focus for Windows RT is development on the new Windows runtime, or WinRT, which we unveiled in September and forms the foundation of a new generation of cloud-enabled, touch-enabled, web-connected apps of all kinds.

For a breakdown of the key features by edition see their blog post on the Windows Team Blog.

ZDNet has benchmarked Windows 8 Consumer Preview vs. Windows 7, for those of you who are curious what to expect in those regards. Of course things may change with the Release Preview but it will at least give you some idea of the performance.

Usage of the Consumer Preview is more than twice as much as that of the Windows 7 Beta over the same period of time. Millions of people using everyday. I’m curious how many will be using the Release Preview? Will you? What are your experiences with the Consumer Preview? Let us know in the comments below.