Today Microsoft posted a new blog post on the Building Windows 8 blog demonstrating the upcoming built-in Family Safety features in Windows 8, now rebranded as Microsoft Family Safety. For those who had been using Windows Live Family Safety, what was detailed in the blog post is probably no surprise to you, with only several minor enhancements such as Windows Store app downloads monitoring, simplified sign-up process (with just a checkbox) for a “monitor-first” approach, and a re-branded activity reporting email.

However, what was also shown in the blog post is a video by Phil Sohn, Senior Program Manager for Family Safety, demonstrating features of the new built-in Family Safety. Those sharp-eyed would realise that he is probably using a pre-release version of Windows 8 Release Preview for the demo, as well as several updated apps possibly coming in the Release Preview. Below is a screenshot from the video showing the new-and-updated Mail app: 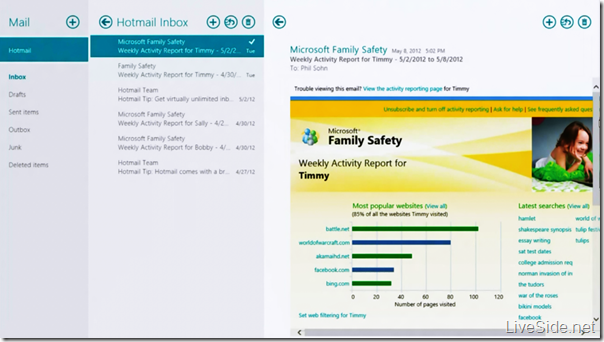 As you can see, when compared to the preview version in Windows 8 Consumer Preview, the new Mail apps seems to now retain the three-column view, with the left column no longer disappearing when you browse through your emails. The “accounts” and “folders” column seems to also have been merged into one, allowing easy switching between both accounts and folders, and potentially allowing drag-and-drop functionality. The app also seems to have changed from its green accent color to a bluish teal color.

Other apps also appears to have had a color-change too, based on the Live Tiles shown on the Start screen below: 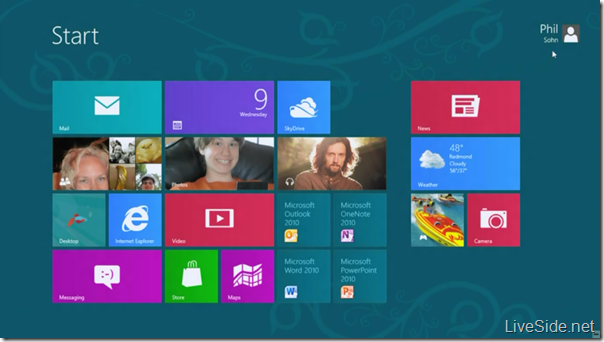 In particular, the built-in People, Photos, Music and Games apps now features a dynamic Live Tile imagery, bringing them closer to their Windows Phone counterparts. We also noticed a new News app, which might come as part of the Release Preview.

The built-in Mail, Calendar, People, Messaging, and Photo apps from the Consumer Preview had been subject to much criticism, and so It will be interesting to see what improvements Microsoft would bring to these apps in the upcoming Release Preview. With only 3 weeks to go, we can’t wait to see what else is in store. Stay tuned!