This morning Amazon.com and Microsoft announced the launch of a new app for Xbox, Amazon Instant Video.  The new app brings new movie releases, current TV episodes, and Prime Instant Video to Xbox Live Gold members, with the Prime features coming to consumers who also hold an Amazon Prime subscription.  Of course you don’t need to subscribe to the $79/year Amazon Prime service (which also offers free 2-day shipping from Amazon, among other features) to use Amazon Instant Video if you’re content with less than premium video content.

In addition, Amazon Kindle users will be able to switch seamlessly between video playing on their Kindle Fire to the Xbox (or back), using Amazon’s “Whispersync” technology.  Amazon is also including a “Watchlist” where users will be able to add any title to the Watchlist, creating a way to organize what to watch next with the apps and Xbox.

Here’s a list of features of the new app, available now for Xbox Live members:

Microsoft also took to its Official Microsoft Blog today to have Yusuf Mehdi, formerly of MSN and Bing, and now Chief Marketing Officer for Xbox, provide some sales stats for the Xbox and hint at news to come out of E3 next week.  Xbox sales continue to “defy gravity” according to the blog post, continuing to rise in sales year after year while other consoles display a much shorter lifespan: 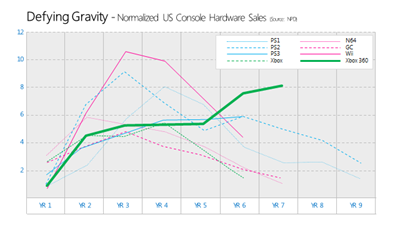 Mehdi then goes on to tease the announcements coming at E3 next week, including more news about Xbox on Windows 8 devices, “new ways to enjoy the entertainment you love”, and a few surprises:

We understand that entertainment has become a multi-screen experience where you and your friends are watching TV, listening to music, and playing games while interacting with your tablets and phones in new ways. We’ve got ideas for making all the entertainment you love more personal, interactive and social across the devices you love—and on the phenomenal Windows 8 devices that are to come.

You’ll see the first of that next week at E3 where we will showcase the very best of Xbox. We’ll unveil new games, show new ways to enjoy the entertainment you love and, as always, we’ll have a few surprises to share!