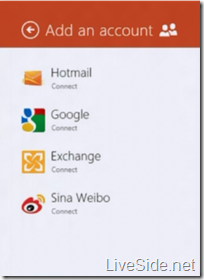 Over on the Building Windows 8 blog, Jeff Kunins, Group Program Manager on the Windows Live, posted details about the People app on Windows 8. If you had been using the People app on Windows 8, or have a Windows Phone, you would’ve known most of the things Jeff has mentioned. However, what was interesting was that Jeff Kunins confirmed via a comment on the post that Sina Weibo (Chinese equivalent of Twitter) is coming as a connection for your Microsoft account, in addition to Facebook, Twitter, Google and LinkedIn. This means that for Chinese users (who doesn’t necessarily have access to Twitter), they will soon be able to tweet and view their Sina Weibo contacts directly within their Windows 8 and Windows Phone People apps. Unfortunately, Jeff also mentioned that Google+ won’t be supported until Google provides an API for the connection. Here’s a quote from Jeff:

Thanks also for the feedback regarding how Contracts and the People app could be used to get more accounts into People, including Google+. As you can see in the screenshots we continue to add partners such as China’s Sina Weibo, and we would be happy to see Google provide the equivalent APIs for Google+ like Facebook, Twitter, and LinkedIn do.

Of course, we told you about this a long time ago, as shown in the screenshot below:

Further, one of the biggest complaints of the People app in Windows 8 Release Preview is the inability to manually link contacts, particularly when your contacts don’t use the same name across different social networks. Fortunately, Jeff Kunins confirmed that this feature will be coming soon in the next update:

Manual contact linking – yes, this is coming.  Like we mentioned in the blog post, this will work similarly to how it already does on Windows Phone and in Hotmail.

What other features would you like to see in the People app, both on Windows 8 and Windows Phone 8? Let us know in the comments below!