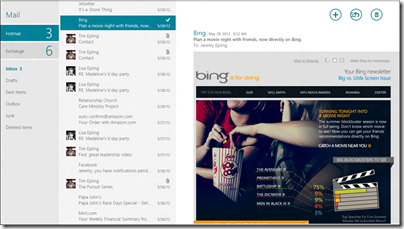 Perhaps one of the most criticized aspect of the new Metro-style Mail app in Windows 8 Release Preview is it’s lack of support for IMAP (Internet Message Access Protocol), a protocol still popular amongst several email providers. In the latest post on the Building Windows 8 blog, Jeremy Epling,
Lead Program Manager for Mail, detailed the design philosophy and some details about the Mail app (if you haven’t had the chance to fully explore the Mail app yet, it’s actually a good read). As part of the blog post, Epling also revealed that support for IMAP and other protocols will be coming in a future update of the Mail app. Here’s an excerpt from the blog post:

The use of standard protocols such as Exchange ActiveSync as implemented in the Mail app are increasingly important, especially because this protocol allows for syncing of contacts and calendar, in addition to mail. (Don’t worry, support for other protocols, such as IMAP, are on the way.)

Epling hasn’t detailed what the “other protocols” are, but we’re guessing POP3 will be included as well in addition to IMAP. The Windows Live Mail application, part of the Windows Live Essentials suite, currently supports POP3, IMAP, as well as DeltaSync (for Hotmail), but has no support for Exchange ActiveSync. So it appears that the Windows 8 Mail app may be supporting more protocols than its predecessor.

Was the lack of IMAP support from the Mail app a deal breaker for you? Would you be using the new Mail app once IMAP support has been added? What else would you like to see supported in the Mail app? Let us know in the comments below!