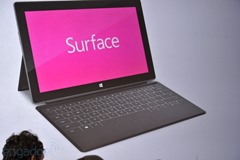 At a hastily convened press event in Los Angeles, revealed this morning to be at Milk Studios, a fashion photography studio amazingly enough on Vista Street, Microsoft, after keeping tech pundits guessing for days, announced a new Microsoft branded tablet, the “Surface”.

Steve Ballmer hit the stage shortly after 4pm PDT and began the presentation with a history of Microsoft and hardware, showing a video that recapped the history of Microsoft hardware, and then brought out Steven Sinofsky and the new tablet, or more precisely tablets, as there are both WindowsRT and Windows/Intel versions of the device.

Including a built in stand and a full .3mm multi-touch keyboard/cover, the Surface is built with a “vapor magnesium” body. Here’s a quick look at a video provided by Microsoft showing off the new Surface family of devices:

We’re digesting all the news and will have a full report soon, but for now take a quick look at Surface and tell us what you think (we’re not sure, but we think we’re blown away!)