Windows Phone 8 – What they didn’t reveal at the Summit

Microsoft finally unveiled Windows Phone 8 at the Windows Phone Summit held on Wednesday, giving us a sneak peek at some of the platform changes, new Start menu, new business and developer features, as well as the announcement of Windows Phone 7.8. However, as mentioned by Joe Belfiore, this is by no means everything that is coming to Windows Phone 8, and Microsoft is set to unveil more consumer and developer-focused details during future events later this year (perhaps an upcoming BUILD conference?).

If you’ve watched the 2 hour long keynote, or you’ve read our quick summary, you would’ve known all the details announced during the event. However, this post is not about what was announced, but all about what they haven’t yet revealed. 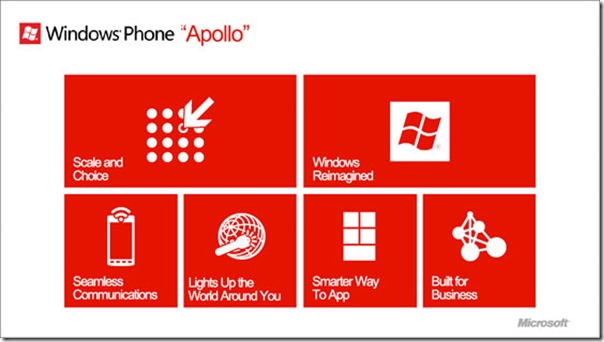 According to Paul Thurrott from WinSupersite, during December 2011 details about Windows Phone codename “Apollo” has already trickled out, and the leak during February this year further confirmed those details. Whilst the Windows Phone Summit yesterday confirmed many of the leaked details, some more consumer and developer focused details were intentionally not revealed. But thanks to Thurrott, who posted all the details from the slides he obtained in December 2011, we can now expect what else is coming to Windows Phone 8. Below is a summary of everything Microsoft didn’t reveal during the event yesterday:

Of course, please take into account that the above is based on information obtained back in December last year, so things may have changed since then. Further we’d also expect whole heaps of other new features and enhancements coming to Windows Phone 8 that wasn’t documented in these early leaks (the new Start screen for example, was something that no one has heard of before). So there’ll still be plenty of things to be excited about Windows Phone 8 in the months ahead!