Sharp eyes over at WPCentral noticed this morning that a new SkyDrive Windows 8 Metro Style app has appeared in the Windows 8 Store, one that turns out to be just a link to download the SkyDrive desktop app.  Joining the current SkyDrive Metro Style app, which runs on the Metro side of Windows 8 and offers access to your SkyDrive files, but not sync setup, this new app appears not to install a Metro style app on your machine at all, but just offers a link to install the SkyDrive desktop app on your Windows 8 PC.  As commenter Bruno H notes on WP Central,  “This is also the first time we see Win32 apps being sold through the marketplace”.  Offering Win32 apps, such as Photoshop and others, through the Windows Store could open up lots of new possibilities: 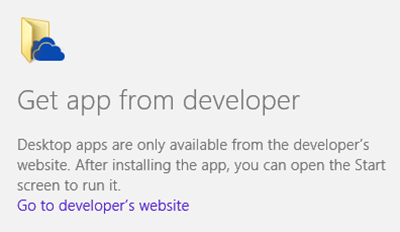 While it’s a bit confusing why there should be a separate app just to install the desktop, sync enabled version, it may be that Microsoft is just readying the store to be able to make it easy to install SkyDrive on new Windows 8 PCs.  Anyway, you can get the download from the Windows Store on your Windows 8 PC (search for SkyDrive), or of course you can visit the SkyDrive website and download the SkyDrive desktop app directly on your Windows 8 or Windows 7 PC, if you haven’t already. 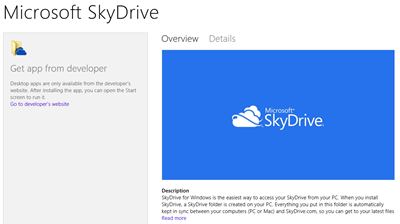 If you do have SkyDrive desktop installed on your Windows 8 PC (and you should!) there doesn’t appear to be any need to get this app, as it only provides a download link from the Store.