Exclusive: A first look at the “Agave” apps for Office 2013 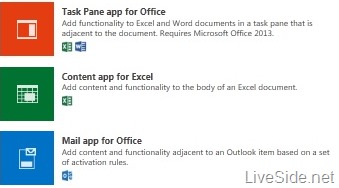 Back in March this year, we reported that Microsoft was readying a Office web extensions platform called “Agaves”, which allows developers to create an area within Office applications that lets webpages interact with documents and augment content with extra features.

Today we received more information about these “Agave” apps. As shown in the image to the right, there are three types of apps available for Office 2013, which are fairly consistent with what we reported earlier. Below we’ve included a real example for each type of app along with screenshots of it in action:

All of these apps can made available by developers on an upcoming Office Store, where developers can list their apps and monetize them in the marketplace. Users can directly install apps by signing in to their Microsoft account or their Office 365 account. With the announcement of Office 2013 Preview (public beta) imminent, perhaps as soon as next Monday, we should be hearing about these “Agave” apps, amongst other new features yet to be revealed, really soon. What do you think about these new “Agave” apps? Let us know in the comments below!