Will Microsoft lift the Cone of Silence beginning Monday?

The latest rumors have Microsoft unveiling Office 15, the Metro inspired but desktop version of their cash cow productivity suite, on Monday, July 16th.   But even with recent announcements about a new Microsoft Windows 8 tablet, the Surface, and some preliminary news about Windows Phone 8 in recent weeks, we still have far more questions than answers about what may prove to be Microsoft’s most momentous year for product launches ever.  While news has been filtering out about Microsoft’s plans for Windows 8 and beyond, the problem with an ecosystem play is that until you’ve talked about everything, you can’t really talk about anything, so we’re hoping that an Office 15 announcement opens the floodgates on Microsoft and Windows 8 news.

So what’s coming?  Lots, of course.  On Monday, we should hear more about what’s coming for Office 15, including, hopefully, more about Office 15 on Windows RT (ARM tablets), or as they are sometimes referred to, “Office 15 Apps”.  Thanks to Paul Thurrott and others, we’ve had at least a few glimpses of the Windows desktop / Metro interface crossover Office 15: 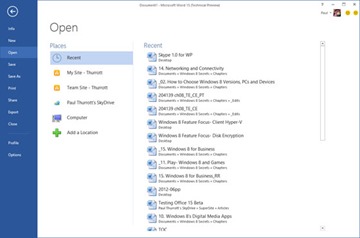 What we haven’t heard is where a Windows RT version of Office 15 fits in, or Office Web Apps, for that matter.  Will we see the new look Web Apps we showed you last month right away?   And what will be the difference between Office 15 Apps on Windows RT tablets like the Surface, and Office Web Apps?

Next up, we’re expecting a refresh of both Hotmail and SkyDrive coming up soon, if Microsoft sticks to its 2 month schedule of releasing new versions of what’s left of Windows Live.  We already showed you some preliminary looks at what is being referred to as “NewMail” (a placeholder name, no need to get excited about a Hotmail name change): 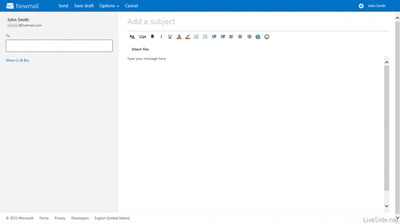 SkyDrive just updated with some backend changes, possibly in anticipation of a wider update coming soon, too, expect to hear more on SkyDrive soon.  No news as yet as to what the heck is happening with Messenger and/or Skype, either.  Will they merge?  Will Messenger survive?  Or will Microsoft do the obvious (but obviously painful) thing and just pull the plug on Messenger and put all its efforts into Skype?

But we’re waiting to hear on lots more from Microsoft, too.  At last week’s Imagine Cup in Sydney, Australia, Microsoft gave away expenses-paid trips to its upcoming developer’s conference, but hasn’t announced a date or venue for the event (which in the past was known as PDC, or the Professional Developers Conference, and last year underwent a name change to “Build”).  Tradition has PDC, or Build, in late September or sometime in October, but even that doesn’t give developers much time to learn the latest and get out there and build Metro style apps.  What’s the holdup on announcing Build 2012?

We also haven’t heard word one on what will happen to Windows 7 users and the future of Windows Live Essentials.  With Microsoft’s decision to drop the “Windows Live” name, in favor of… well, erm, nothing, Essentials will at least have to undergo a name change, if not a Metro makeover similar to Office 15.  Or not.

And speaking of Essentials, will we get significant refreshes of the Windows 8 Metro style versions of what was formerly known as “Windows Live”?  Or will we be left, as Ars Technica asks, “pining for the desktop”?  If you’re using Windows 8, are you using the new Metro style app replacements for Essentials?  Or, like us, did you give up in frustration and go back to the tried and true?

We’ve yet to hear, as well, about more details on Microsoft’s new hardware initiative, the Microsoft Surface family of tablet computers.  Pricing, availability, and probably a host of other details are still to come.

And so it’s the middle of July, with everyone in Redmond back at work after the July 4th holiday, and a Windows 8 launch right around the corner.  They have to start talking sometime, don’t they?