Today Microsoft unveiled a set of previews for Office 2013, and we wrote about some new features in the blogging capabilities featured in Word 2013, and what that might mean for Windows Live Writer. A number of you pointed out that the ability to create blog posts from within Word is not new, and we apologize if it came across as if we thought they were.

What is new (and what we wrote), is that “Publish a Blog Post” is now featured in a new item “Backstage” (under the File menu) in Word 2013, in a new category called Sharing. In addition, creating blog posts has achieved featured status in a new Word “home page” – like start screen (in Word 2010, it’s still the #2 choice after “blank document”, but not nearly as prominently featured): 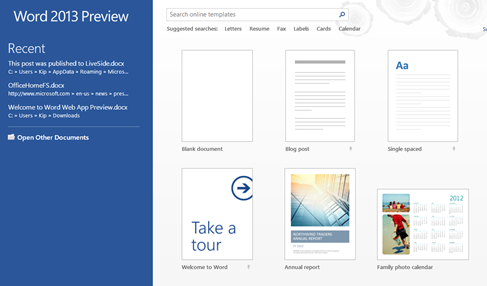 In fact, other than the new prominence, there don’t appear to be many, if any at all new features in the blogging capabilities of Word. So why the post?

The truth is, we don’t think there’s much of a future for Windows Live Writer, or for any of the Windows Live Essentials apps. Now, that doesn’t mean they’re going to disappear from your computer, or even stop being available for download. But Microsoft continues to hint that the future of these apps is in doubt, going so far as to discontinue the “Windows Live” name, and we’re just taking the newfound prominence of Word as a blog application as another indication.

Windows Live Writer came along for the ride with Microsoft’s acquisition of JJ Allaire’s Onfolio in March of 2006. Onfolio was folded into the Windows Live Toolbar before it was dropped in 2008. Wikipedia states that the app was developed at Microsoft, but in fact, Writer was a work in progress when the Onfolio guys moved from Boston to Redmond, according to what they told us at the time, and it was released shortly afterwards, in August.

Like another “cool” but ill-fated project, Windows Home Server (which IS discontinued as of Windows Server 2012), Writer just doesn’t seem to fit into Microsoft’s grand plans. While bloggers may appreciate Writer, it isn’t connected into, nor does it do much to sell, other products such as Office. Windows Home Server, likewise, was selling a full featured copy (if you look past some licensing language) of Windows Server 2003 for $49, and did little upsell users to either small business servers, or to the recently announced pay-for-storage SkyDrive options. In fact, both products could be said to steer users AWAY from their more full-featured, if costly, Microsoft alternatives. Not good at all if you’re trying to create profits.

At the time it was released, Writer did have a use case, and that was Windows Live Spaces, the by now long gone Microsoft blogging and social networking platform. After Spaces was retired, though, there just isn’t much reason to keep supporting Writer. There are of course plenty of reasons to make an attempt to get bloggers to use Word, and Office, and that’s the direction we see Microsoft headed.

The rest of Windows Live Essentials may be in the same boat. Remember that what were once the flagships of Windows Live, Hotmail, Messenger, and SkyDrive, are no longer even in the same group as the rest of Essentials, which had moved into the Windows team more than a year ago. We’re seeing lots of functionality added to Hotmail, and a newer, friendlier Outlook included in Office 2013. Think that bodes well for Windows Live Mail?

Messenger, of course, is on its own little rock, with a solid (but shrinking) user base around the world, but an acquisition of Skype and a move away from instant messaging towards mobile based text messages has Messenger in a precarious position, too.

Now, we’d love to be wrong, and we’d happily pay a bit even for a fully supported and up to date Windows Live Writer. We’re typing this in Word 2013, though, if that tells you anything, and while it doesn’t offer the same features (or the same bugs) as Writer, we’re getting excited about the possibilities of extending Word with the new app platform, and ending up with a fully supported, 3rd party extensible, and long lasting blog editor. That’s what our tea leaves are telling us, anyway.