Will Nokia get Windows Phone 8 first?

We know that Windows Phone 8 is coming this fall, but recently there’s been lots of speculation about the specific timing, and even rumors that Nokia, who as we just said have bet the house on Windows Phone, may be getting ready to launch Windows Phone 8 devices earlier than most.

Today, Mary Jo Foley posted what she calls “whisper dates” for a number of upcoming Microsoft launches, including Windows Phone 8:

Windows Phone 8: September (RTM for “Apollo” OS); November (GA for first devices)
…
I had heard previously some talk that Microsoft might be working to hold some kind of a “launch” where it could announce immediate availability of both Windows 8 and Windows Phone 8 devices, but based on these new dates, it looks like any kind of orchestrated launch event would seem to need to be later than October 26.

That September date is interesting because of Nokia’s “Nokia World” developer’s conference, which was originally scheduled for September 25-26, but instead Nokia World has been broken up into “a number of smaller, more intimate events with specific audiences in mind”.

The first of these, catering “primarily to our operator and retail partners”, is set to take place in Helsinki, Finland on September 5th and 6th.  Another event, “Collaboration Day 2012”, is scheduled for September 25th.

The independent Nokia Blog noticed the other day that the flagship Nokia Store in Helsinki has been closed for renovation, slated to open again the day after that first Nokia World event, on September 7th: 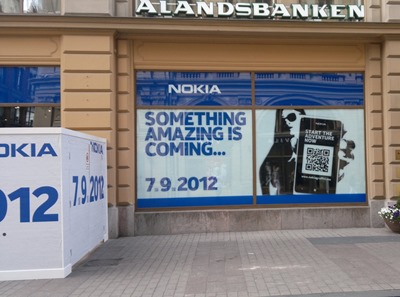 While it sounds to us like this is more about a newly revamped store, and less about new devices going on sale (and as an aside, isn’t closing your flagship store for a month and a half a little excessive, no matter what sort of amazement is coming?), perhaps Nokia will begin pushing Windows Phone 8 by then, even if it’s not quite ready to sell the new devices.

But there are other hints that Nokia may get Windows Phone 8 first, as well.  In today’s earnings announcement conference call, according to a transcript posted on Seeking Alpha, Nokia CEO Stephen Elop dropped what may have been a few hints about the timing of a Nokia release of Windows Phone 8, in a response to an analyst’s question:

Sure, Steve. Will Nokia be the first and flagship platform for Windows 8?

So we’re not making any specific announcements about announced timing or how that happens. But one of the things — just to give a signal in this direction, on a number of occasions, Windows Phone 8 has been demonstrated. It’s been demonstrated on Nokia hardware. We’re working with them every single day on the initial hardware platforms and everything. So clearly, we have a very close relationship that is not the same as what anyone else has at this point. So the relationships are good there.

Nokia clearly needs all the help it can get as it goes through a painful “transition period”, but to us an early September launch seems awfully early.  Having to come out at Nokia World empty handed isn’t going to go over well, but with what amounts to a series of Nokia Worlds, rather than just one, perhaps that revamped Nokia Store will have something amazing to sell, after all.