That elusive Surface pricing: what price would you subscribe to? 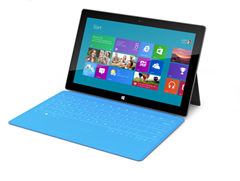 In the past few weeks, we’ve heard it all about Microsoft Surface pricing, everything from $199 to 299 to 399 to 599 and beyond.  Microsoft made quite a splash back in July with its announcement of the Microsoft Surface family of computers, introducing self branded Windows 8 and Windows RT tablets that feature a combination tablet cover/keyboard.  But almost immediately, speculation about the pricing of the tablets arose.  Microsoft would only say that the pricing would be “competitive” with other tablets in the market, which didn’t narrow it down much.

The $199 rumor started with a post on Engadget, who heard from someone attending Microsoft’s TechReady15 conference, where launch details, including the price, were apparently laid out.  Many in the industry had a hard time believing that Microsoft would, or could sell the Surface for $199.

What the Engadget report didn’t include, and most speculation is now centering around, is that Microsoft could bundle the Surface with a subscription package, bringing the initial price down, making a splash with a low price, and then making at least some of that up later with two year subscriptions to Xbox Live, Office 365, or some similar subscription.  Hal Berenson, a former Microsoft Distinguished Engineer, notes that “Microsoft is moving to a subscription model wherever they can figure out how to do so”, thinks that Microsoft’s Xbox subscription plan experiment may be a model:

So it is completely within expectations, and in fact the $99 Xbox deal is just telegraphing it for all who are willing to listen, that Microsoft is going to offer the Surface for $199 when you sign up for a TBD subscription of some sort.

One piece very much still missing from this scenario are details about Microsoft’s latest attempt at a music service, this time called Xbox Music.  While the Zune Music Pass never took off, perhaps mostly because of poor Zune and Windows Phone sales, a newly revamped but similar service with the buying power of Xbox and Windows behind it may have a better shot.  We still haven’t seen much about Xbox Music, although it should be coming soon, perhaps indicated by a recent speed increase on Zune Pass:

I don't know what was done, if anything, with Zune Pass servers over the weekend but for the love of pete … insanely fast! #Zune

So, will the Surface actually sell for all of these rumored prices?  $199 with a 2 year premium subscription, maybe $399 for an introductory subscription, and $599 with no subscription at all?  Hopefully we’ll be finding out soon.