Thanks to a tip from “smileyctp”, we’re getting some new indications that Microsoft’s strategy for SkyDrive and Xbox Music may be getting closer to being revealed.  Smileyctp, who has had a bit of his music collection up on SkyDrive for weeks, noticed yesterday something that hadn’t been there before: SkyDrive was adding album art (in the form of both large and small thumbnails) to the collection: 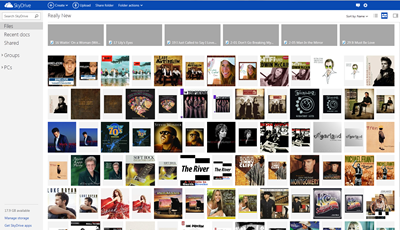 We’ve posted a number of times about SkyDrive and music before: in May of last year we reported on some indications that Windows Phone “Mango” might support music streaming from SkyDrive (although that hasn’t materialized and was in fact later denied by Microsoft); then when Xbox Music was announced at E3 in June, Paul Thurrott reported that Xbox Music would have SkyDrive integration.

We’ve played around with adding some music to our SkyDrive account here, and sure enough, it’s been populated with thumbnail album art, too:

We’re able to play the music files (by choosing to open them from SkyDrive, or just double-clicking on them from the Windows 8 SkyDrive “Modern” app), but to be fair we haven’t paid close enough attention to how SkyDrive treated music files before to know if this is new, and we fully expect a better experience than what’s available today, give all the effort they’re making to add in album art.

Microsoft has teased Xbox Music before, and although we already have the RTM bits of Windows 8 in hand, we still don’t know much about the details of the new service.  We’re expecting a next generation Zune Pass service, with SkyDrive, Windows Phone, and Windows 8 integration, but how it will all work, and where those 30 million songs are coming from are still mysteries, at least for now.  With the changes smileyctp spotted in SkyDrive, we may know more soon.