In mid August, SkyDrive updated its look, added features, upgraded its apps for PC and Mac, and announced that a SkyDrive for Android app was coming to complement the apps for iOS and Windows Phone: 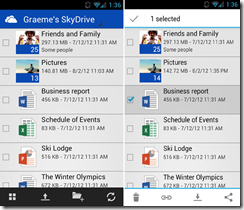 Today, Microsoft is making that Android app available for download from the Android Marketplace, announcing the new app in a blog on the Inside SkyDrive blog*.  According to the post, the app is designed to work best with Android 4.0 (ICS, or Ice Cream Sandwich), but it is also “fully functional on Android 2.3 and above”.

The app includes the usual features:

… although at least according to one tweet from Peter Bright from Ars Technica, the Android app won’t do everything the Windows Phone version will do:

Apparently the iOS app won’t open OneNote files either, according to a reply to @DrPizza’s tweet from Romit Mehta.

From what we’re hearing, the SkyDrive for Android app is part of Wave 5 Milestone 4, which should include the appearance of a Recycle Bin for SkyDrive, and of course we’re still waiting for updates to Calendar, support for Excel forms, and more, so there’s more to come for SkyDrive before Windows 8 ships, we hope.

*  Just a note on Microsoft’s blogging conventions – back in the day we had a blog for every product, and lots from team members.  Many of those were on Spaces, and many of those links are dead now.  Then Microsoft aimed to consolidate their blogs and blogging strategy, and we eventually came to the “Inside Windows Live” blog, which didn’t work when Microsoft dropped “Windows Live” branding.  It was renamed “Inside SkyDrive, Hotmail, and Messenger” (although it’s still referred to as “Inside Windows Live” in the Windows Blog navigation), but that of course is already outdated, and so we have a new “Inside SkyDrive” blog.  Hotmail, which is now transitioning to Outlook.com, has joined the Outlook blog (btw does that mean that Hotmail/Outlook.com is part of Office, now?), and so that leaves Messenger out in the cold, where it most likely is as a product, too.