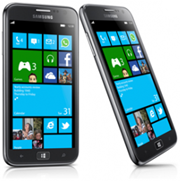 IFA, the consumer electronics show in Berlin, apparently is setting up as the de-facto unveiling for Windows 8 and Windows Phone 8 devices, with a number of manufacturers showing off devices this week.  While the show is decidedly Android focused, Sony and Samsung have both announced new Windows 8 tablets, and Microsoft, via its Windows Phone blog, is touting Samsung’s new “Ativ S” Windows Phone 8 device, a super thin (and super big) phone sporting some super specs:

The Windows Phone blog post is promising a full recap of all the devices announced at IFA on August 31st on the Blogging Windows blog.

Sony introduced a  new set of tablet devices, including a $399 Xperia device (running Android) that may give us some clues as to Microsoft Surface pricing (although the Xperia costs another $99 for the keyboard), and two new Vaio Windows 8 tablets, the Vaio Duo 11, which Sony calls a “hybrid-style notebook”, and the Vaio Tap 20, a 20” tablet.

Samsung also is introducing a series of Ativ tablets, some using their new “S” pen technology (Bill Gates would be so proud!): 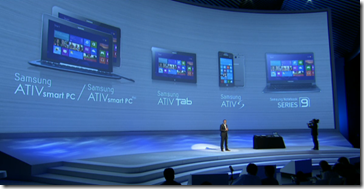 We’ll be hearing lots more about new tablets and phones as IFA continues during the week, but things are definitely heating up!