SkyDrive continues to open up its platform to developers of all types, announcing today in a blog post that Attachments.me (a service that saves and retrieves Gmail attachments to Dropbox, Box, and Google Drive) has added SkyDrive to the list, and promoting some new features making it easier for web developers to use SkyDrive.

Attachments.me, via a Chrome extension, has added SkyDrive to its list of save locations: 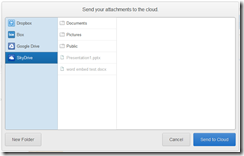 SkyDrive is at TechCrunch Disrupt this week, promoting SkyDrive, and is promoting some additions to the SkyDrive APIs that were announced last month.

Specifically, SkyDrive has added an app picker for web developers using their Javascript API, making it as easy to add a file picker to a web page as it is to a Windows 8 app:

Shortly after we launched the SkyDrive API, we began to get feedback from web developers about how difficult it was to actually integrate opening or saving files to SkyDrive. And at the same time, developers were finding this very easy when building Windows 8 apps. The key problem was that app developers would need to re-implement the SkyDrive file picker to create a great experience when accessing or saving files to SkyDrive.

and now allows full resolution images to be programmatically stored on SkyDrive:

By default, if an uploaded photo is larger than 2048 × 2048 pixels in size, SkyDrive automatically tries to shrink it so that it fits within this 2048 × 2048 pixel size constraint. We think that provides a good default balance between a high quality picture but also not using up tons of storage. But there are times you really want the full resolution, and so you override this behavior when using the SkyDrive REST API.

If you’re a developer looking to use SkyDrive in your apps, check out the Live Interactive SDK on dev.live.com, which includes SkyDrive, Identity, Hotmail, and Messenger APIs.