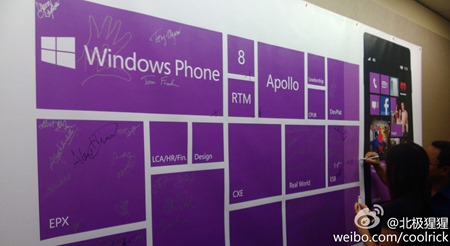 According to a member of Windows Phone team who posted from his Sina Weibo account, Microsoft’s Windows Phone 8 has now been released to manufacturing (RTM). Terry Myerson, Windows Phone Division Corporate VP, and his team members have signed off on the RTM signature wall.

The Windows Phone 8 OS, codenamed Apollo, was first unveiled by Microsoft at the Windows Phone Summit in June 2012, and later a leaked Windows Phone 8 SDK revealed more new features for end users. Now that the OS is finalized and being delivered to hardware OEMs, it’s a straight road ahead to get it into the hands of consumers. The latest rumor shows that Microsoft is targeting an October 29 Windows Phone 8 launch date. So stay tuned, we will hear more about WP8 soon. (via LiveSino)