Oh, there’s a Skype beta for Mac, too

On Thursday, the Skype Garage blog announced the availability of Skype for Windows 5.11, but as we’re pretty Windows focused here, we missed that they subsequently also announced a Skype for Mac 5.11 beta, too.  Similar to the Skype for Windows client, you can now use your Microsoft account and/or your Facebook account to log in to Skype. 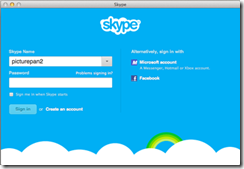 As some of you noted, some work still needs to be done to consolidate contact lists between Microsoft accounts, Facebook and Skype, as if you have the same contact under all three accounts they’ll show up 3 times, but hopefully that will all get resolved as Skype and Messenger move ever closer together.

We’ve been using Skype for Windows 5.11 beta for the last couple of days here, and while we miss media sharing (having to open WLM back up when we want to share images), we could get used to the Skype client.

If you’re on a Mac and want to try out logging in to Skype via Microsoft account or Facebook, you can download it here, and you can learn more about either the Windows or Mac version of Skype 5.11 beta on the Skype Garage blog, including lists of new features, bug fixes, and known issues for both clients.