Today, Microsoft announced TypeScript, an open source “superset” of JavaScript, and introduced a Channel 9 video featuring Anders Hejlsberg introducing the new language, but in the process introducing maybe a bit more than he wanted.

In a video that spends most of its time in Visual Studio explaining the new language, for one brief moment we’re allowed a glimpse at what’s possibly a new feature on the way for the Bing Home Page.  At about 43:58 of the video, Hejlsberg opens up Internet Explorer, revealing an “internal preview” version of the home page, with what appears to be some interesting new features: 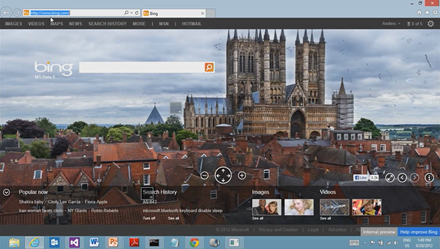 As you can see in this screenshot, centered in the image are navigation controls that would appear to allow you to pan and zoom into the image, as well as a full screen icon to the right of the page (just to the right of the Facebook Like button).  Whether this links to Deep Zoom imagery, as our tipster François suggests, which could possibly be Canvas Zoom imagery using HTML5, we’re not sure, but it looks fun.

The Bing Home Page has become an iconic feature of Bing, running video and/or a usually stunning daily image that while it may not be taking much market share from Google, has allowed Bing to develop its own identity.  Hopefully we’ll be seeing an interactive Bing Home Page soon!

(Good catch and thanks for the tip, François!)