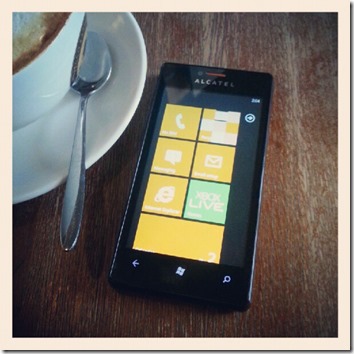 According to tweets from the account, the devices are said to come with Windows Phone 7.8 (although the images above shows Windows Phone 7.5 running on them), and from the images we can see the device sports a 5 megapixel camera and comes in two colors – black and orange. Other specifications about the phone has yet to be revealed, however the device is said to come before the end of the year to the Russian market, with a “very interesting” price hinting the device will be aimed at the budget phones market.

Update: Russian website Hi-Tech.Mail.ru (via WPCentral) reports that the final name of the device is like to be Alcatel One Touch View, and the device is estimated to cost around 7990 rubles (approximately USD256). The website also revealed some of the rumored specs for the device: