IFTTT (IF This, Then That), has just opened up a channel, or interface, for SkyDrive.  IFTTT (pronounced “like gift without the g”, according to the website), makes connecting up various web properties, or channels, together in an extremely simple way, by writing or enabling “recipes”.  It’s probably easier to set up than it is to describe, but having SkyDrive enabled as a Channel means that you can now simply do stuff like “Save my public Flickr photos to my SkyDrive”, or “Sync Dropbox to SkyDrive”: 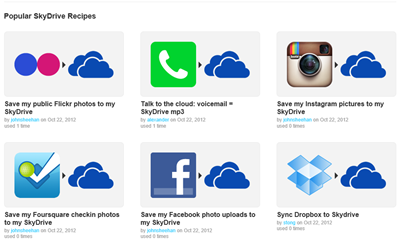 IFTTT currently supports 54 Channels, including Facebook, Instagram, LinkedIn, Evernote, Flickr, and more.  Making use of the public SkyDrive API, inclusion in IFTTT is great news and should help easily extend SkyDrive, although the interface is pretty basic at this point.  We haven’t had a chance to play with it yet (although we have toyed with IFTTT before).  Are you an IFTTT user?  Let us know what you think, and what you come up with.