More updates in the mix for Windows 8 tonight, as perhaps the top three of the “built – in” apps for Windows 8 have all received updates: Xbox Music, Games, and SmartGlass: 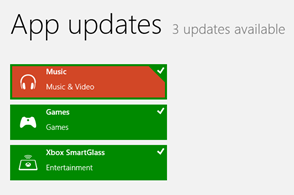 If you’re on Windows 8, you can download and install the apps from the Windows Store, or they should be ready for you on your new Surface or Windows 8 install beginning on October 26th.