As part of yesterday’s festivities, Microsoft completely revamped Windows.com (well windows.microsoft.com, really), recreating the site with a clean bold new look.  For those of us wondering where Microsoft will take what’s left of Windows Live, and especially Windows Live Essentials (now Windows Essentials), the new redesign seems to be tipping its hand and there’s some pretty bold handwriting on the wall.  Windows Photo Gallery and Windows Movie Maker are receiving top billing, but Windows Essentials, Writer, and Messenger are nowhere to be found. 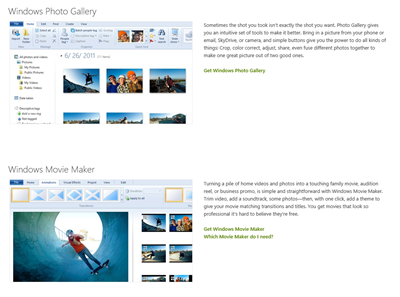 However, we’re not finding a mention of Messenger or Writer at all on the new site.  We’ve long feared for the future of Writer (we’re writing this, and almost all of our blog posts, on Writer), and yesterday’s prominent introduction of the young woman who was blogging the event from her Surface, using Word, was no fluke, in our opinion.  Sure, it was a Surface RT, but if you can blog from Word with a Surface, why not everywhere?

Messenger, too, at least the client, seems destined to fade away over time.  We were glad to hear that Skype (which isn’t featured on Windows.com either, apparently because it’s not “Windows”) is moving to the Messenger backend, and we expect that the current Messenger clients will still continue to work (as will Writer), but don’t expect any/many new updates.

Still, we find it telling that not even Windows Essentials made it on to the new Windows.com, or did we miss something?

(Thanks for the tip, Mark!)