How fast is SkyDrive growing?

In yesterday’s Windows 8 keynote, Microsoft President Steven Sinofsky didn’t talk much about what used to be Windows Live, but he did announce some new data regarding SkyDrive:

Let me just give you an example. SkyDrive has over 200 million customers storing data in their free SkyDrive. It’s accessible from PCs, Web browsers, mobile devices, your Windows Phone, everywhere. Today, SkyDrive has 11 billion photos, 550 million documents, storing over 14 petabytes of data, and, every month, two petabytes of data are added.

Some big numbers, and Microsoft has been pushing hard on SkyDrive, releasing desktop and Windows 8 apps, updating the experience, and bringing SkyDrive front and center as the place to store your photos, documents, and more when you connect with a Microsoft account.

Last February, in a post on the Building Windows 8 blog, Program Managers Omar Shahine and Mike Torres released and earlier set of numbers, and it’s interesting to compare and see just how fast SkyDrive has grown in the past 8 months:

Today we provide personal cloud storage for 17 million SkyDrive customers. These are active customers who use it every month to privately share photos and collaborate on Office documents. We currently store approximately 10 petabytes of user data (one petabyte is a million gigabytes, or a million billion bytes) and we expect to grow that beyond what some of the largest scale services on the Internet support today (for example, Hotmail stores over 100PB of user data, and since we share much of the same infrastructure, we have a lot of deep insights and knowledge about how to scale SkyDrive).

From the looks of it, SkyDrive has more than 11 times as many customers as it did back in February, but there are some differences in the numbers, so that may not be quite true (or true at all, really).  Back in February, those were “active customers who use it (SkyDrive) every month”, but in the Windows 8 launch event keynote, it’s “customers storing data in their free SkyDrive”.  We’re guessing that at least some of those are not “active” customers.  An apples to oranges comparison, unfortunately. 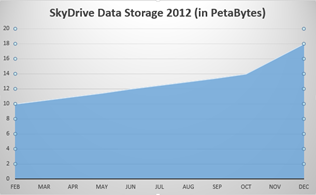 Like probably everyone, Microsoft likes to throw numbers around, but likes those numbers not to have any real context; if they sound good, that’s all that matters.  So it’s nice to see at least a couple numbers we can compare.  Hopefully, the next time Steven Sinofsky is onstage or Omar and Mike write a blog post, they’ll share more numbers and we’ll be able to get an idea just how well SkyDrive is doing.