Rumors about Microsoft bringing a cloud music playing to SkyDrive had been floating around for a long time. Back in May 2011 when Microsoft first announced Windows Phone 7.5 “Mango”, we reported on some indications that “Mango” might support music streaming from SkyDrive (although later denied by Microsoft). Later on during E3 2012, Microsoft announced the Xbox Music service, and speculations of music integration in SkyDrive had surfaced once again, with sightings of music album arts appearing in SkyDrive folders. When Microsoft officially launched Xbox Music in October, the company officially acknowledged that cloud storage is coming next year to the Xbox Music service, however there were no mentions of whether this cloud storage will be based on the SkyDrive platform or not:

Cloud Storage. Available in the coming year, a scan-and-match feature will take you beyond the 30 million tracks globally offered through Xbox Music. It will add all the music you own to your Xbox Music cloud catalog, including music acquired through other services. This means you can add almost any content you have to your personal Xbox Music collection, even if it’s not available in the Xbox Music catalog.

Today, LiveSide was able to exclusively confirm that Microsoft will be bringing a music player feature to SkyDrive.com. We had been digging around some of the codes in the current version of SkyDrive.com, and noticed references related to a SkyDrive music player, as shown below:

If that wasn’t enough, we were also able to obtain resource images relating to the music player feature from an internal testing version of SkyDrive.com, currently at version 17 (Wave 6), as shown below: 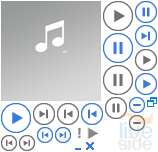 We were unable to confirm whether the SkyDrive music player feature will have any relationship with Xbox Music, however we certainly hope so. SkyDrive’s competitors, including iCloud, Amazon Cloud Player and Google Play Music, has had the ability to allow users to upload their own music onto their cloud storage services, and stream them via the web or onto any other devices. It would be interesting to see how SkyDrive’s music player offering, hopefully highly integrated with Xbox Music, will pan out compared to its competitors next year.

What do you think about this new feature? Would this finally be one of the killer features for SkyDrive and/or Xbox Music? Let us know in the comments below!