Last November marked the Xbox 360’s seventh birthday, and while developers continue to do some amazing things with the aging console, it should come as no surprise that Microsoft is readying a followup. That said, rumors surrounding the next Xbox (codenamed Durango, more recently known as Kryptos) have reached a fever pitch. Will this be the year Microsoft lifts their silence on the new system? Here are five
reasons why we believe the answer is a resounding yes.

Say what you’d like about Microsoft’s lackluster E3 2012 showing, but the simple truth is, first party Xbox 360 titles were few and far between.  Heavy reliance upon established franchises became apparent early on. Worse still, it was possible to count the number of slated Microsoft Studios releases for 2013 on one hand.  In the past, Microsoft has used E3 as a vehicle to announce their lineup for well into the coming year – but last summer’s Media Briefing saw only two exclusives announced for 2013: Gears of War: Judgment, and the Signal Studios developed free-to-play title, Ascend: New Gods. Barring any surprise game reveals in the months leading up to E3 this June, that’s every first party title on the docket thus far. 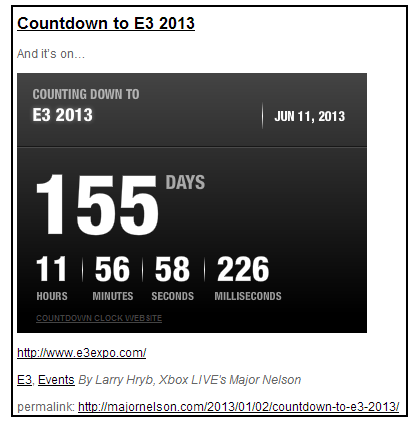 For the first time in nearly a decade, Larry Hyrb, Director of Programming for Xbox Live, has placed a countdown to E3 widget on his blog, prompting many to speculate as to his reasoning. Why generate hype for the expo already, when it is still yet to occur for another five months? Take this one with the appropriate grain of salt, but it serves to reason that Hyrb is counting down to this year’s E3 because Microsoft is planning a big reveal; think space ponchos and surprise celebrity guests big.

Microsoft has hit a technical ceiling with the Xbox 360.

Game worlds have become significantly more complex and graphically intense within the past seven years. At this point, rendering engines, such as Glacier 2 and Unreal Engine, have been fully optimized for the console, often with stunning results. As textures increase in size, however, it becomes a two-fold problem for the Xbox 360. Developers have taken to streaming texture files directly off the game disc, for improved visual fidelity. On that token, streaming high resolution files from the disc may result in performance issues such as stuttering or frame drops; because of this, numerous games only unlock the higher quality visuals when installed to the Xbox 360’s hard drive.  In addition, the Xbox 360’s optical drive, a standard dual layer DVD-ROM, has become problematic from a development standpoint. 7.2 gigabytes per disc is no longer sufficient, especially with games that utilize advanced facial animations, such as L.A. Noire. Two to three disc titles have quickly emerged as the new norm.

Durango’s Chipset, codenamed Oban, has purportedly been released to production.

The fifth, and perhaps most telling reason why we expect that Durango will be announced this year is the fact that the “brains” of the upcoming console, a custom AMD SOC codenamed Oban,  may have already been released to production. According to tech news site SemiAccurate, an early version (used for development kits) of the chipset had an initial production run last January, with the retail variant scheduled to be released to production last December. Manufacturing delays notwithstanding, this suggests that, if true, final specifications and design of the new Xbox could be completed at this point.  If this in indeed the case, expect Microsoft to be eager to show its hand as soon as possible.

Thus far, as Microsoft has bowed out of CES this year, all signs point to a possible E3 2013 Durango/Kryptos reveal. This does not, however, guarantee a holiday 2013 release.  While this would undoubtedly prove beneficial, it is a risky move.  Doing so gives Microsoft a scant 5-6 month window between announcement and release. While this is not unheard of, several key factors would need to come into play – chipset availability, supply chain, and most importantly, software. One thing is all but certain; the next Xbox will become much more than a rumor in the coming months.