The Sinofsky Spin: will we hear the other side of the story?

In case you missed it, Steven Sinofsky, who left Microsoft immediately after the launch of Windows 8 by “mutual” agreement, has started blogging again.  Sinofsky was famous for his internal blog posts while at Microsoft, and turned a series of posts into a book, “One Strategy”.  Apparently his new blog, Learning by Shipping, will pick up where those posts left off (minus the juicy internal details, of course), tackling Sinofsky’s views on “products, product development, and management”.

The blog won’t be about “specifics or the past regarding Microsoft”, but in the first few posts, especially Sinofsky’s most recent one chronicling his impressions of CES, it’s clear that in Steven Sinofsky’s world, his engineering approach to product development: data gathering, sharing raw data, whether or not to include bullet points or hyperlinks in reports, etc., is that metrics drive product development.

It looks like we’re not through wading through 5,000 word blog posts, although in response to a comment that his posts are too long, he seems to intimate that if you only read Sinofsky, you don’t need anything else:

Keep in mind that at about 5000 words it is much shorter than if you read even half of the posts from a single blog (average about 200 posts of 250 words) you are still an order of magnitude more words. That’s just considering word count.

Do away with the “snark”, Sinofsky says, and just listen to him, and he’ll tell you what you need to hear.

The problem, of course, is that there’s another side to this story – Sinofsky didn’t leave Microsoft solely on his own accord, and at least some parts of his style and his approach to software development were potentially so damaging to Microsoft that a decision was made to force him out.  Or that’s what we’re assuming.  The real problem is deeper than that: we don’t even know what really happened. 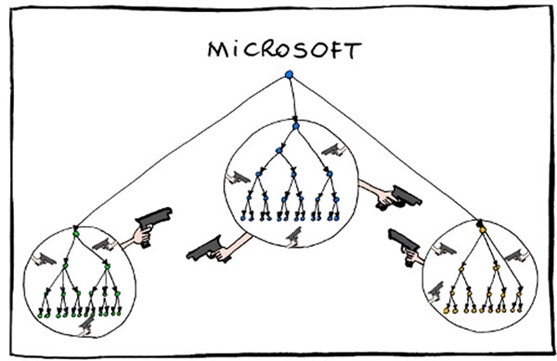 There isn’t any question that Sinofsky is a master at engineering management: as Bill Gates’ technical assistant, and as the head of engineering efforts that revamped both Office and Windows, Sinofsky indeed has “made the trains run on time”.  But there’s more to running a company than metrics driven product development.  Sinofsky pissed off a lot of people both within the company and without.  His “Windows first” philosophy, where collaboration was largely lip service, was summed up in a piece of “fiction” by Hal Berenson in his blog post on Collaboration (we’ve taken the liberty of substituting Berenson’s “Org A” and “Org B” for “Windows” and “Windows Phone”, which is pretty obvious and makes the reading a bit easier):

We may not know for a long long time what damage Sinofsky did to Microsoft, but it was potentially enough to remove him as President of Windows, and show him the door.  Apparently, he left the company with a less than healthy relationship between Windows Phone and E&D (read: Xbox) and Windows, did damage to a relationship with OEMs who were livid with not only the Surface announcement last June but that they learned of it only that morning, and was increasingly at odds with top management and CEO Steve Ballmer.

We’re glad Sinofsky is blogging, and look forward (well, sorta… they’re so looonnnnggg!!!) to reading his posts, we’re subscribed (breathlessly) to his Feedburner feed, but Sinofsky’s legacy may be more about what didn’t work in his approach, than what did.  We just wish we were hearing the other side of the story, even if there is some snark involved.