Earlier this week, Microsoft released Office 365 Home Premium, a $99/yr subscription service offering an updated Office suite along with extended SkyDrive storage (an extra 20GB, a $10/yr value).  Now today in a blog post on the Bing Search blog, The Bing team reminds us that they have a suite of apps of their own, called Bing Apps for Office, that can extend Office 365 Home Premium in some very useful ways. 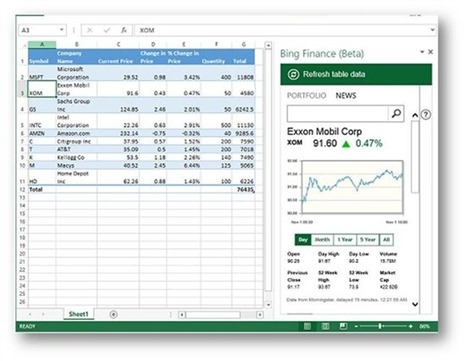 Microsoft has had an extensibility model for Office before, of course, and in fact, according to Hal Berenson, it may be one of the reasons why the Microsoft Surface RT didn’t ship with Outlook:

You see, Outlook was never intended to be simply a mail client or PIM, it was intended to be an application platform.   And while CRM is perhaps the most obvious case of where Microsoft succeeded in that regard, many enterprises use other third-party or home-grown apps built on the Outlook platform.  So while bringing Outlook 2013 to Windows RT would certainly bring a first class email app to the platform, it actually wouldn’t meet the needs of the customers who would really pay for it and justify the long-term downside to the approach.

One of the problems, of course, of switching to a new app platform, even if it is a much better platform than before, is that the previous platform is now broken, and for Enterprise, that’s a very big deal.  Still, as Mary Jo Foley noted, Microsoft is working on an “Outlook RT”, but there’s still apparently indecision on how, or even if, an updated “RT” version of Outlook ships.

But we’re impressed by the folks at Bing who seem more than anyone else in the company to take app development seriously.  These apps for Office, which have been around since late last summer, provide useful extensions to Office while at the same time showcasing the new platform.